Pennsylvania Congressional District 6 – Regina Mauro is worried history is repeating itself, and she wants to do something to help.

“I am the daughter of Cuban immigrants who lived through the revolution and saw their country transformed pretty much overnight when Fidel Castro came into power,” she said. “They saw all these freedoms — freedom of speech, freedom of religion, freedom to own your own business — taken away.”

The Chester County Republican said the experiences of her parents helped shape who she is today. It has made her into someone who loves democracy, someone who is passionate about protecting the freedoms guaranteed to Americans.

And, she said, that is the reason why she launched a campaign to represent the 6th Congressional District, which includes all of Chester County and parts of Berks County.

Mauro will be running against Realtor Ron Vogel, businessman Steve Fanelli, former Chester County Chamber of Commerce President Guy Ciarrocchi and chemical engineer Bob Kennedy for the Republican nomination in the May 17 primary. The winner of the primary will likely face Democrat Chrissy Houlahan, who is seeking her third term, in the general election. 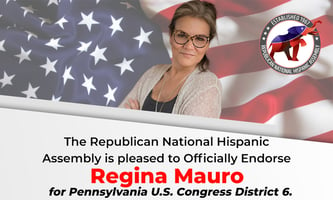